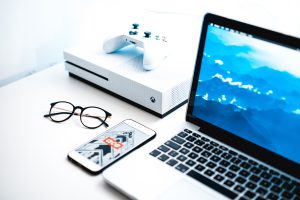 Learning a language is generally considered one of the best and most transferable skills you can learn in the modern world, but for many it can be a long and tedious task to teach yourself, or it can be too expensive to hire a tutor. To overcome this problem, I recommend an ingenious method to teaching yourself a new language, while having fun and making effective use of your time: Playing video games.

Most people sit for hours playing video games without really learning much of value other than how to get better at that game. However, I feel that gaming can become one of the best ways for you to learn a new language. Below, I have listed a wide variety of games available for learning a new language, providing you with options for a range of different preferences for genre and style.

The Walking Dead is an interactive zombie survival game that allows players to select from several options to make decisions, with each choice having massive impacts on how the story of the game unfolds. To progress through the story, you must understand what each dialogue is saying – ensuring that you begin to pick up new words and phrases in various languages very quickly. Another massive benefit to using The Walking Dead to learn a new language is the fact that new ‘episodes’ of the game come out every season, providing you with frequent sources of learning words and phrases in almost any language of your choosing!

GTA V is an open world game which offers a lot of variety in activities for players. The city featured in the game hosts a wide range of missions, NPC’s (Non-player characters) and games, all of which feature lots of dialogue and perfect examples of everyday terms and phrases that would be used by a native in your language of choice. For language learning purposes, I recommend playing the game offline, so that you can play at your own pace, and really experience everything that Grand Theft Auto 5 has to offer.

World of Warcraft is a fantasy open world MMORPG (Massive Multiplayer Online Role-Playing Game) offering a lot in the way of learning a new language. Firstly, interactions with NPC’s feature a lot of dialogue, ensuring that you can learn a wide range of words and phrases in your language of choice. Secondly, this game is online and currently has a thriving community of existing and new players all over the world, many of which would be more than happy to help another WoW player learn their native language, if you asked nicely.

The Stanley Parable is a first-person exploration game, offering a language learning option without violence for any younger gamers eager to enrich themselves. You will explore the world guided by various speech and text cues, with a mix of simple and complex words being used, perfect for gradually building up your skill in a given language.